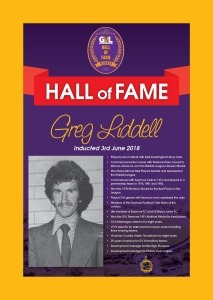 One of the best small players in the GVL has been able to demonstrate his passion for the game both on the field and through his support of junior football. The GVL was lucky when Melbourne Physical education teacher Greg Liddell was appointed to teach at the Seymour Technical High school in 1975.

Greg loved football and had played junior football at East Sandringham boys club and at Watsonia during his teacher training.

From 1973 to 75 He played senior football with a group of mates at Kilmore. The fast moving rover soon came under notice and he was selected to represent the Riddell League. He won three Kilmore best player awards and had a stellar year in 1974 when he won the Riddell League Best and fairest Bowen medal as well as being best afield in the League’s Grand Final that year. Greg was subsequently selected in the Kilmore Football Club team of the previous 52 years.

Greg arrived at Seymour and was recruited to the Lions by Seymour president Jim Ure. It was Seymour’s first year in the GVL and Greg didn’t let his new club down He was at his best as he scooped the ball out of the packs and drove the Lions forward on their way to a premiership. He played in three premierships with the Lions, 1976, 1981 and 1982.

With the introduction of the Winfield Country Championships in 1978, Greg was selected as second rover in the GV team and he played in all 4 matches as the GVL powered its way to its first Country Championship title. Greg was in top form and performed brilliantly for the League as he did for his club and capped off a wonderful year when he won the Morrison Medal as the Best and fairest player in the League.

Greg played a total of 6 games for the GVL representative team, he became a prolific kick getter for the Lions and was chosen as Captain of Seymour. He played a total of 276 games with Seymour. Late in his career he helped out the Seymour seconds and won the Abikhair medal in 1991 for best reserves player.

Seymour was fortunate to have such a dedicated player in the club who had the club at heart and loved the game.

Following his retirement as a player Greg immediately used his talents as a recruiting officer for the Carlton Football Club. He was also a GVL selector from 1992 – 1998 including the 1995 State Championship team. Greg was elevated to the state scene when he was appointed as a state senior selector from 1993 to 1999 including three National winning teams. In Junior circles Greg was a Victorian Country under 16 selector.

Greg was highly regarded for his skills with junior footballers and he was appointed as development manager for the Bendigo Pioneers in the Sunraysia / Mallee region. Greg has also given 25 years service to the GV/GM Schoolboys team.

From 2004 to 20018 he has been the AFL development manager for the Goulburn Murray region for the Murray Bushrangers.

With his love for junior football it’s not surprising that Greg regards his biggest thrill in football is seeing his three sons Brendan, Gerrard and Damian play together and in 2006 the three boys all played in Seymour premiership teams.

Greg has been wonderfully supported by his wife Maureen who has every right to be very proud of Greg as he is inducted into the GVL Hall of Fame.