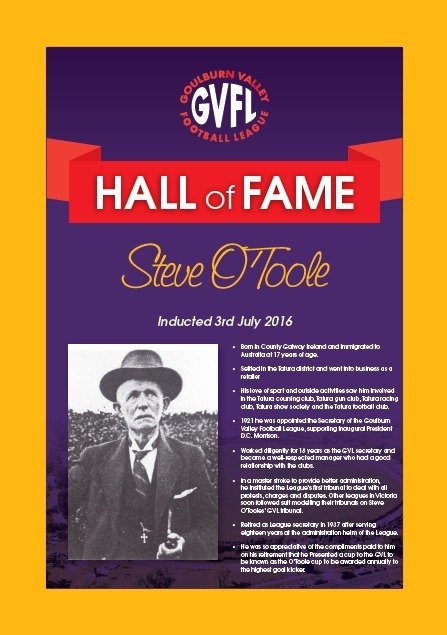 When the Hall of Fame selection committee was searching through the records of the League, we found the names of some of the people who set up and administered the League in the early days. Some of those people such as D.C. Morrison, Jack Arthur and Tom Hastie have been inducted into the Hall of Fame. Many had given long years of service.

Tonight we add another long serving administrator to the Hall of Fame.

During the research we came across a man named Steve O’Toole who was born in County Galway in Ireland in 1870 and came to Australia when he was 17 years old. After a stint in Western Australia prospecting for gold he settled in the Tatura district and became a well-respected member of the local community. Steve became involved in a number of pursuits and was known for his examples of sportsmanship, fair play and district spiritedness. He was associated with the Tatura Agricultural Society, the gun club, the coursing club, the racing club and the football club.

It was during his time with the football club that he became involved with the Goulburn Valley League. In 1921 he was persuaded to become the Secretary of the League supporting the then president D.C.Morrison. Steve took to the task with his usual flair and became a well credentialed administrator in the days when there was no league office and all league matters and correspondence was written by hand.

Steve was diligent in conducting the business of football and had a good relationship with the clubs in the League. During his eighteen years as secretary his League minutes reveal great attention to detail, with all major items clearly indexed.

One of his most important legacies during his time as secretary was the formation of a special tribunal. He was concerned that there was no process for deciding the result of disputes within the League and Steve discussed the need for such a body with all clubs. Eventually he was able to steer the League to form a special tribunal to deal with all protests, charges and disputes. The first tribunal consisted of the president, D.C. Morrison, J.A. Carey of Tatura and W.M. Abernethy of Shepparton with Steve O’Toole as tribunal secretary. It was a master stroke for better administration and many other Leagues around Victoria soon followed in the GVL’s footsteps and established their own tribunals. Locally it was often referred to as the “O’Toole tribunal”.

The Goulburn Valley League prospered under Steve O’Tooles’ administration and the league delegates were so impressed with his work that they continued to vote him in as secretary for eighteen years.

In 1937 Steve indicated to the league that he would not be continuing in the position. On his resignation he was naturally the recipient of generous acknowledgements. In his response to those tributes, he made an offer to present a cup which was called the O’Toole cup and was presented to the leading goal kicker for many years.

Men like Steve O’Toole were responsible for the GVL being recognised as one of the best administrated leagues in the state.