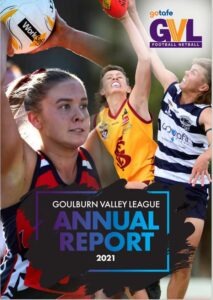 The Annual General Meeting of the GOTAFE Goulburn Valley League was held on Wednesday 24 November 2021.

Despite this result, the League is in a strong financial position with Net Assets of $203,440.

Roff said, “The Board anticipated this result after taking a conscious decision to reduce fees for clubs and assist with other costs such as umpiring, video filming and production costs of the Weekender – the value of these measures exceeded $60,000.”

The League also paid out $10,000 as the final grant to one of its clubs for capital improvements, which has seen a total $120,000 paid out to all clubs in recent years from the proceeds from sale of the League’s former office. The League’s contribution has been significantly added to by Club financial and in-kind contributions, and government funding.

In addition, an upgrade to the League’s website was carried out.

The season was haphazard at best due to COVID-19 and snap lockdowns. We did all that we could to ensure the season carried on given the restrictions but ultimately had to make the decision to end the season after 11 rounds when Victoria entered its 7th lockdown.”

Roff continued by saying, “During the current pandemic, the GOTAFE Goulburn Valley League’s (GVL) number one priority has continued to be the health and wellbeing of its supporters, players, umpires, officials, partners, volunteers and committees and everyone across all our local communities. Our ultimate aim was that we would head into 2022 with all 12 of our member clubs.”

The GVL Board sees some changes with Brett Stevens not seeking re-election. Mr Roff said, “Freddo McMahon and Mick Williams have been re-elected to the GVL Board for a further two-year term. We welcome Anthony Putt who was elected to fill the space that Brett Stevens leaves. Brett followed a successful period as Echuca Club President with a valuable contribution to the Board and Anthony’s background in the governance of not for profit organisations and his football background will be a real asset going forward “

League Operations Manager Josephine Spencer said, “Whilst the 2021 season wasn’t what we had hoped for, we continue to support our clubs and have begun our planning for 2022 with all twelve clubs ready to participate. We would like to take this opportunity to thank all our club volunteers, club executives and committees, players, community members, our valued sponsors and AFL Goulburn Murray for their patience and ongoing support as we have been navigating through these unprecedented times.”