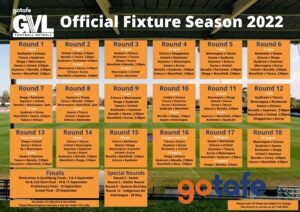 GOTAFE Goulburn Valley League football and netball returns on 9 April 2022, with the league releasing its fixture.

GVL Board Chairman David Roff said, “After a year that saw only 11 rounds played due to the impacts of COVID-19, we are eagerly looking forward to the return of Football and Netball in 2022. Round 1 kicks off on Saturday 9 April.”

Mr Roff continued by saying, “We are pleased to also announce that clubs will host at least one home game on a Sunday next season. This is to help alleviate any umpire shortages that we saw during this season and expect to see next season as we see the return of community sport. The Sunday games will be a real feature of our fixture with some key clashes scheduled, such as the Traditional ANZAC day matches Mooroopna V Shepparton United and Euroa v Seymour.”

There are two split rounds scheduled and the 28 May will see Interleague action return as the GVL play hosts to the Ovens & Murray League.

GVL Operations Manager Josephine Spencer said, “2021 has shown just how vital Community Football and Netball is. It’s more than just a game. It’s about the connection people have to their clubs and its members, as well as to the league. We are looking forward to Season 2022.”